Equestrian in Our Lady’s Templemore

Our Lady’s secondary school has always upheld and promoted a very strong and variedequestrian tradition which is rooted in many Tipperary households. Outside of the school,many of our students compete in show jumping or eventing competitions and others are members of local pony clubs and hunt clubs. Every year we have students from both the Junior and Senior school representing us in either show jumping competitions held throughout the country or the annual All Ireland interschools hunter trials in March. Students can opt to compete in individual competitions or as a team.

The ability, discipline & professionalism of the equestrian teams is exceptional with all students always doing both themselves and the school proud. There is always a huge interest in show jumping with usually competitions taking place nationwide each weekend of the academic calendar. As well as this, we always have a huge interest in taking part in the All Ireland interschool hunter trials in March of each year.

The All Ireland Hunter Trials were held on Saturday  15th March 2014. The venue was Fenelons, Curracruit, Muine Bheag, Bagnelstown, Co. Carlow. The event was hosted by Coláiste Pobail Osraí in Kilkenny City.

We had two teams of three riders on each team. Congratulations to both teams for competing. A huge congratulations to the All Ireland winning team of three Carroll brothers representing Our Lady’s Secondary School, Templemore, in their maroon and white jerseys. Christopher Carroll, John Carroll and Patrick Carroll, from Errill who indeed did Our Lady’s proud .

It was as usual an early start. Getting up at 5 am, loading horses, walking the course as the sun was rising, being at tack inspection a half  hour before.  The competitions commenced at the early time of 8.00 am with last years winners Newbridge College leading the way.

The day continued with each team taking off at 90 second intervals. Despite the day being held up with one or two accidents, thankfully everything went off reasonably smoothly. There were 80 teams in total from Meath, Kildare, Wexford, Limerick, Kilkenny etc.

This event culminated with the first place being awarded to Our Lady’s Templemore, who had an original entry of three brothers on one team under the very watchful eye of their dad James Carroll, the Chef d’Equipe. Much credit is due to both him and his wife Mary for their endless energy, enthusiasm and love of horse riding that they have instilled in their children. In fact the skill and horsemanship in how they managed a challenging and tricky 27 fences left the viewers under no illusion that Templemore was indeed a competitor to be reckoned with. With only nine clear rounds at the end of the competition, it was down to time. Loretto College, Kilkenny had arrived home in 4.15 minutes. However the Carroll brothers had in fact arrived home in 4.13 minutes. They had won the All Ireland with a margin of two seconds. What a feat, what a win!

We all remember Carrolls Boomerang years ago, well the Carroll brothers will go down in history, as the boys who challenged and defeated eight teams from Kilkenny College,  many teams from all over Tipperary, The Loretto, Newbridge College, Clongowes, New Ross, Laurel Hill, and many other schools.

It was comparable to Ireland beating France in Paris on the same weekend. It is lovely to witness a well deserved victory on a beautiful spring day. Many of us remember being at these Trials over the years, the hailstones and severe weather conditions with wind and rain, and walking the course through mud and wet.

Of course we must highly recommend our 2nd team of three girls who completed the course with only one fault. Caoimhe O’Brien, Katie Marnell and Grace Martin. They were all fantastic young competitors, tackling a formidable course with great ability and confidence. Well done to them, and no doubt they will look forward to many successful competitions in the future.

Thanks to their parents, who were so encouraging and supportive throughout the day. All students competed individually too, and did quite well. The boys also competed individually, and Pat Carroll true to form came home 9th in the junior singles. There were 170 competitors in his competition.

The presentation of prizes followed and representatives from main sponsors, Mount Juliet, Connolly’s Red Mills as well as from Horsesport Ireland were present to hand over the trophies to the winners. The team received a well coveted Plate, inscribed with all the names of team winners over the years. Each member of the team individually received a rosette, a cup, a horse rug, and a voucher for the Gaeltacht. (As the event was held during Seachtain naGaeilge)

Particular thanks to our school principal for encouraging and supporting Equestrian events at our school. Martin Fenlon and his staff are to be commended on the condition of the fences and the ground. Great credit is due to all involved, a staggering show of volunteer effort from parents, friends, past pupils, students and staff of all schools. In particular great thanks to the most unsung of all heroes, the Fence Stewards who at the end of the day are the ones who are relied on to record the event and ultimately determine the overall result of the efforts of all the participants involved in each of the three competitions.

A great day of celebration was held in Our Lady’s later on, when Charlie Swan came to the school together with his wife Carol Hyde to recognise our All Ireland win. Charlie Swan is a former National Hunt jockey associated with the great Istabraq. He encouraged the pupils to complete their education if they want to pursue a career in horse riding. He had regretted not having completed secondary school himself. Carol Hyde had also been on an All Irelandwinning School Hunter Trial competition when she attended Laurel Hill. We were deeply indepted to Charlie Swan for taking time out from his horse training to join us at Our Lady’s. 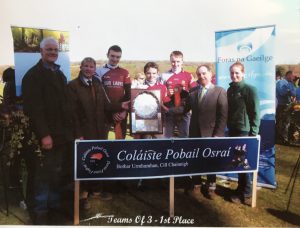 After the success of the Carroll brothers in 2014, we set off again in March 2015 to the All-Ireland Interschools Hunter trials which took place in Ballon, Co. Carlow in the hope of bringing the trophy back to Templemore.

We had many teams of students taking part on this day, with some taking part in individual competitions also. With the course on the day proving very testing and tricky, we were delighted to come in 5th place in the teams of three with Katie Marnell, Aaron Fogarty and Pat Carroll.

Equestrian Memories in Our Lady’s